Healthcare workers often bear the brunt of emotive and high pressure situations, with many people believing that lashing out in the heat of the moment can often be justified.

The Never OK campaign reminds patients, visitors and any other people in hospital that there are no circumstances in which abuse of NHS staff will be tolerated and that appropriate action will always be taken.

Exclusion orders and injunctions have been placed on disruptive visitors who have caused upset to staff and other patients.

The results of the last NHS Staff Survey, which gauges feedback on a national scale, showed that one in three workers at the Great Western Hospital had experienced harassment, bullying or abuse from patients, their relatives or other visitors in the last 12 months.

It also revealed that one in ten staff at the Swindon hospital had been subject to physical violence from the people they were trying to care for.

As a result the Trust has stepped up measures to protect staff, with some teams now being issued with body cameras as part of their standard uniform.

Personal panic alarms are also given to the most exposed members of staff, such as those in the Emergency Department, while an in house security team patrol the hospital at all times of day and night.

It is hoped that through Never OK, healthcare workers will be able to come to work and do the job they love without fear of abuse or harassment. 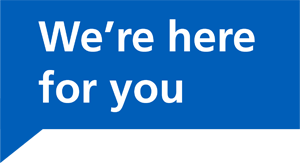